A little blessing, just in time for Christmas, in Jon and Amanda’s own words …

Our adoption story started before we even knew it was going to happen, but God knew all along. This was his plan.

In 2013 Amanda turned 30, at which age she had always determined, she would start her family. 30 came and went but she and Jon weren’t discouraged, they continued to try to get pregnant. In January 2014 Amanda miscarried at only about 4 weeks.   Once again, she and Jon weren’t discouraged, and were assured that the miscarriage was typical. October rolled around and they still weren’t pregnant. Amanda had seen an ad for a free info session for a fertility clinic and she and Jon decided it might be a good idea to check it out. After some tests and some fertility treatments, still nothing. The next round of more aggressive treatments was getting ready to start, but in January 2015 Amanda went to the hospital with what she thought was pneumonia. It was actually a virus that had attacked her heart. Her heart had been weakened by the virus and was functioning little to none. Jon and her family never gave up hope and stayed by her side in the hospital the whole time. At one point the doctors gave Jon paperwork to place her on the heart transplant list. It’s a God thing — that she is alive and has fully recovered, after spending almost a month in the hospital, and 18 days in a medical coma. Becoming pregnant at this time, with the compromised condition of her heart and having to be on several medications, was discouraged by all doctors.

Amanda and Jon felt sorry for themselves for a little while, but were always trying to figure out the next steps to grow their family, as they had so much love to give a child. After researching some other options, they talked with some friends and asked them to keep their ears open for some adoption options through churches and other Christian organizations. This led them to the recommendation to talk to John & Cindy King, of Victorious Hope Adoption Consultants, in April 2016.

Jon and Amanda wanted to complete each step of the paperwork process as quickly as possible, and were soon home study approved in June. They applied to 2 agencies in FL at the end of August. The waiting was the worst part. They kept the adoption process a secret from friends and family, even from their parents and siblings, as they didn’t want the added pressure of everyone asking them for updates and questions. They went through emotional peaks and valleys during this waiting period. Seeing all of their friends with their cute kids and their fun family activities made their heartache even worse. In November 2016 they had decided maybe they would apply to a 3rd agency in FL to increase the odds of being matched. This 3rd option required a sizable upfront fee that they really didn’t want to spend, but they were willing to take the risk for the hope of a match.

Turns out, Sunday Nov. 27th , 2016, the day before they were going to send in the 3rd application and sizable fee, they found out they were matched. The baby boy was due January 10th 2017.

Elated, a whole new set of emotions set in for Jon & Amanda. They couldn’t believe they were going to have a baby in less than 2 months. They were scared and excited at the same time. They decided to not buy anything for the baby, since they knew that anything can happen when you adopt. They were nervous to meet the birth parents, which was arranged for December 17th 2016. Their flights were booked and they were getting anxious.

December 14th , 2016, their case worker texted them that they might need to change their flights, as the birth mom was having contractions. This brought a whole new level of nervousness to Jon & Amanda as now they had NO time to prepare mentally or prepare the physical things they needed for a baby. Once again a God thing happened. A few phone calls later their friends and neighbors had provided everything they needed for traveling with a baby and the essentials they needed for the first few weeks after they got home. Their special blessing was born 12/14/16 @ 10:32pm. 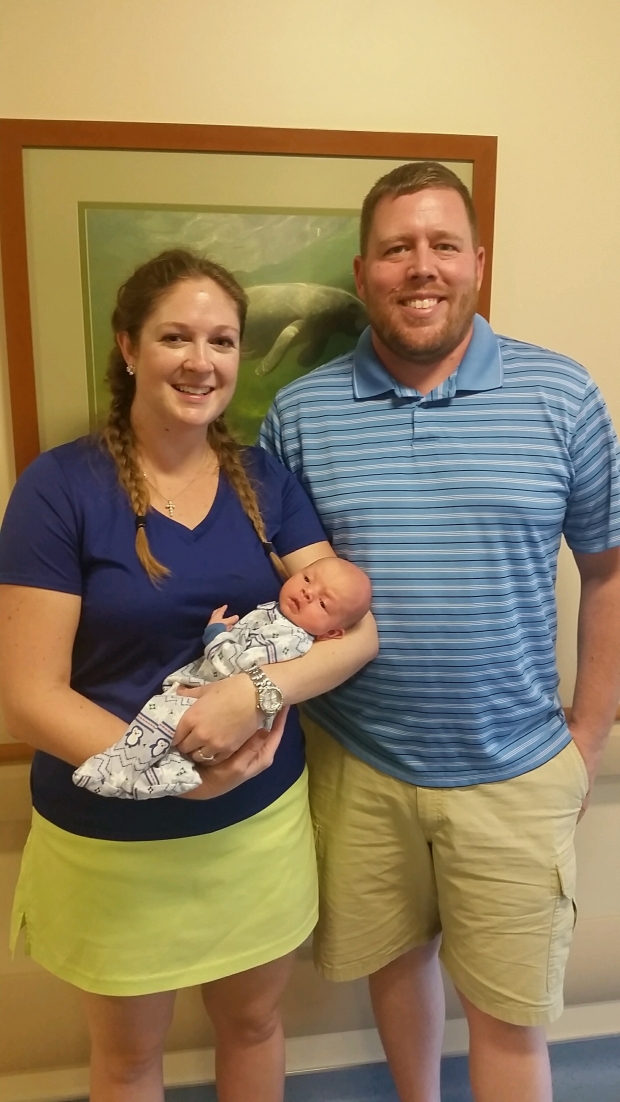 Jon and Amanda were able to meet the birth parents the following day and thank them for this wonderful gift they gave to them. The birth parents thanked Jon & Amanda for being able to give their birth child a better life. It was a short but sweet meeting. They finally got to meet their son around 1pm on 12/15/16. He was, and is, absolutely perfect! You can see the hand of God when you look at a newborn and Jon and Amanda’s lives were instantly changed forever.